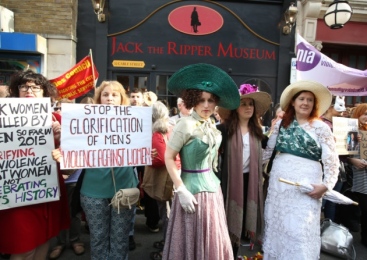 The community came out in force with protesters from all walks of life packed solidly outside the controversial Jack the Ripper museum last night for its planned opening in Cable Street near the Tower of London. 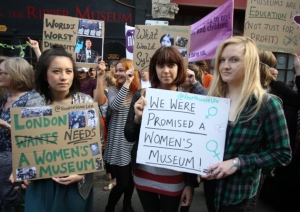 Many women dressed as suffragettes highlighting what was promised in the original planning application to Tower Hamlets Council for a museum of heritage.

Instead, they are getting a “tacky” tourist attraction “glorifying” a man who killed women.

“The way this came about was completely dishonest,” Kate Connerly, biographer of suffragette Sylvia Pankhurst, told the crowd. “It was billed as dedicated to women’s history—until it was unveiled as a Ripper museum.

“That was grotesque, insulting and an abuser of women.” 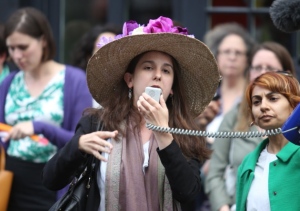 The East End saw the birth of the working class suffragette movement, she pointed out, where women were ‘written off’, yet created a dynamic movement that galvanised people to fight for political rights.

Women from all walks of life joined last night’s protest—mums with children, an East End vicar and community activists as well as academics and historians from all over London.

“It’s appalling,” she said. “Instead of the rich social history of the East End and women’s achievements, they glorify someone who killed five women.” 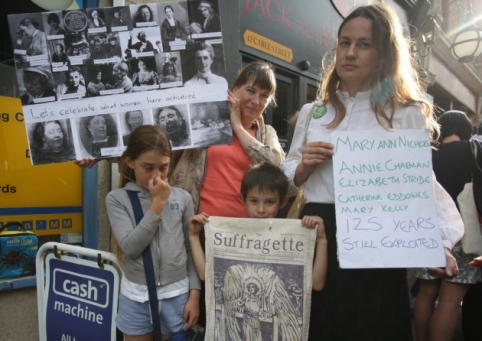 Toni Davy, campaigner from Wapping who has been fighting to save Shadwell’s King Edward Memorial Park from the Thames sewer construction, said: “This borough has gone through deceit in local government with the outgoing mayor and this should be a fresh start for us, but this museum glorifies murder of women.

“This is my street—it’s special. We’ve got enough grot on the streets and don’t need this reminding us of past ghosts. It’s just a horror story.”

The Bishopsgate Institute which has chronicled the East End’s social history for the past 120 years has an extensive archive on Jack the Ripper—but says the new museum in Cable Street doesn’t fit in with any serious study.

The institute’s Stefan Dickers, joining the protest, told the East London Advertiser: “We have no problem with the Whitechapel Murders when used as a tool looking at the East End’s social conditions of the day—my problem is this museum’s exploitative nature as a purely commercial venture, a tacky tourist attraction.

The tacky sign saying ‘dare you enter the morgue’ is just distasteful, gory and horrible and is not what this area needs.”

The protest included the clergy. The Vicar St Paul’s Bow Common, The Rev Bernadette Hagarty, told the crowd: “It’s important that this isn’t a ‘one off’—we have to keep the pressure up, so that we do get the museum we were promised.”

She said later: “I work with a lot of women in my parish who continue to live with domestic violence. This museum glorifies violence against women and goes against Gospel values.”

Historian David Rosenberg, a retired primary school teacher who runs historic tours of the East End, spoke of the role women played in the 1936 Battle of Cable Street which halted Mosley’s Blackshirts, when 13 were among those arrested.

“Police thought they’d got through to make a path for the fascists,” he told the protest. “They were stuck between the first two barracades when the women pelted them from the windows of the tenement flats with everything they could lay their hands on—the police had to retreat.”

Last night’s protest was the first of two days of picketing planned in Cable Street, with another due tonight, organised by members of Class War.

He said: “It has become clear that the council’s planning department was misled by the applicant.”

The application was to convert a disused shop to “create a world class museum that celebrates the historic, current and future contribution of the women of the East End”, which on that basis was approved in January.

But the hoardings were removed last week to reveal a red and black painted Ripper museum with a skull-and-crossbones—which had suddenly been painted over by the owners before protesters turned up.

Yet the black shop front still bears a sign daring tourists “to enter the morgue” in the basement.

The council was now investigating whether the museum signboard contravenes planning approval conditions.

Researcher David Seidel, a legal pensions fund specialist for a City law firm in Liverpool Street, has just completed his Whitechapel play about the 1888 murders, who suggests the new museum is “missing a trick”.

He told the Advertiser: “I was struck by how much information people had on the victims, that each one was in an abusive relationship trying to get away when society crushed them. They were like the prototypes of the suffragettes and today’s feminists. 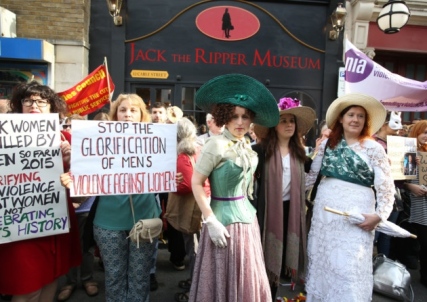 “The museum is missing a trick, as these women are really interesting characters who should be commemorated and studied.

“The Ripper is not so interesting—the mystique goes the day someone figures who he is.”

The closure of the Metropolitan University’s Women’s Library at Whitechapel in 2013 was cited in the planning application as showing demand for the museum in Cable Street—but no mention of Jack the Ripper.

The above article is copied from http://www.eastlondonadvertiser.co.uk/ 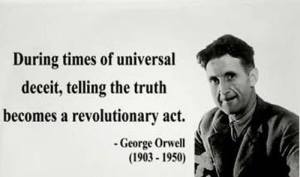