THE family of severely disabled Stuart Chester, who has been forced to prove he is unfit for work under the Government welfare cuts, have launched a campaigning Facebook page in his name in a bid to help other disabled people, writes Janice Burns. 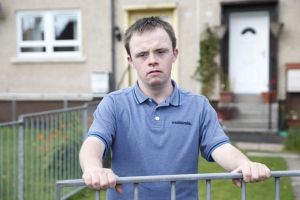 Stuart’s story touched the hearts of hundreds of Scots after it appeared  in The National this week and now his family are using social media to reach out to people across the world.

She said: “We have a lot of messages from people all over the world like Australia, Canada and the US.

“They have sent messages supporting us and some were from carers in the same position where they are having to help people with different physical and mental health problems and learning difficulties fill out these forms and are finding it very stressful. I am very keen to take Stuart’s story to Westminster because we cannot allow this to continue. I feel so strongly that something needs to be done.

“The message of Stuart’s Story Facebook page is keep fighting. It is not just about Stuart. It is about all vulnerable adults who are receiving these letters from the DWP.”

Her mum Deborah said: “Setting up a Facebook page is a good way to get Stuart’s story out across the world.

“Since the story appeared in The National I have had such an amazing response from people. I have been overwhelmed and cannot thank people enough.

“I can only hope that by speaking out about it we can stop Iain Duncan Smith hounding the most vulnerable people in our society.

“What he is doing to sick and disabled people is absolutely disgusting.”

The above article is from The National